Now that all of the dust has settled, Antifa Dallas would like to tell y’all about how a small corn cart became the second business to go on our Boycott list.It all began when a simple elote merchant sold his cart to a gringo.

The cart was repainted and “swag’d” out to sell corn for $4 a cup (about 2X as high as OG eloteros sell them). Their gentrifying small business was doing fine until one day they sent out this post on instagram.

For those of us unfamiliar with anti Latin@ racism. Beginning in the 1930s, Latin@s were commonly referred to by racist whites as “roaches” because their mass migration and large families. Also Home Depot refers to undocumented workers who have to sell their labor in front of hardware stores in order to feed their families. It didn’t take very long for a Xicana woman, Luz Hernandez, to call them out on their bigotry.

Like the Doublewide, a quick apology for their racist post probably would have been enough to have Luz drop the issue. But like any other gringo business owner, the feelings and opinions of People of Color mean less than nothing to them. So, doing what they do, they told her to, “…choke on an elote and die.”

Now here at Antifa Dallas, we believe that an injury to one is an injury to all. If you come at one of our sisters, you picked yourself a fight with the entire Dallas Left.

Hundreds of angry posts soon flooded Corn Connection’s social media platforms. Decrying the violence spouted by Corn Connection, educating Corn Connection supporters about why it is fucked up to say racist shit about Latin@s while profiting off a Latin@ recipe.

Soon Corn Connection was going into panic mode, and abandoned their instagram to escape the consequences their dumbass racist error. The instagram, which was soon decolonized by a local comrade, now is used to educate people about the hardworking eloteros in the DFW area, and fights against gentrification and cultural appropriation. The few platforms that Corn Connection had remaining were commented heavily, so in an effort to save face, Corn Connection issues this corny (couldn’t help it) apology: 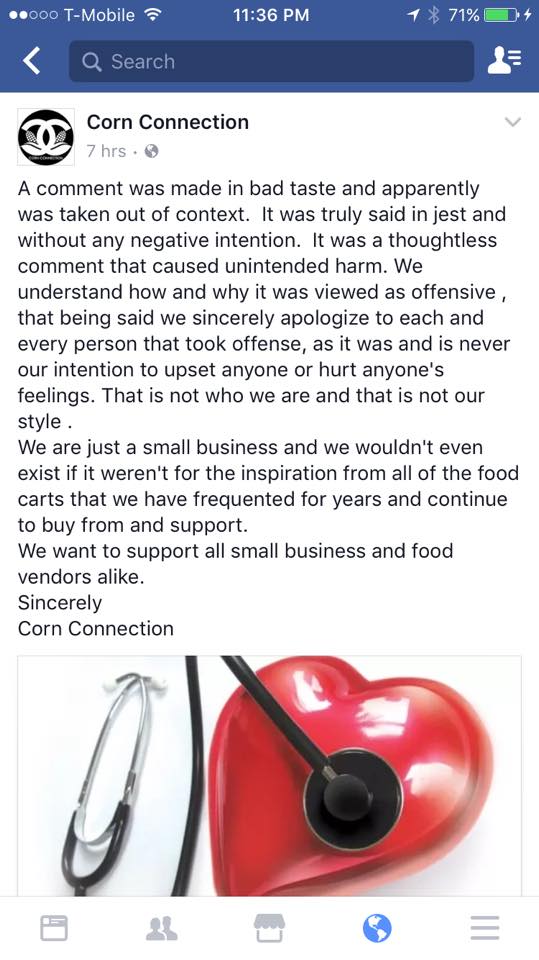 The apology was originally written on their facebook, (the account has since been deactivated) and featured a link to a Luz Hernandez (not the Dallas Luz), in an effort to dox her. The apology was put on blast. Hundreds of comments supporting Latin@s enveloped Corn Connection. Each comment subsequently deleted.

Soon after this the local media caught on. In the tradition of gringo media, they interviewed Corn Connection, and nobody else. Here, and here. Only the Dallas Morning News and Dallas Observer bothered to include quotes from anyone against the Corn Connection.

It is important to note, that Corn Connection and Doublewide continue to operate in Dallas. We should strive to be as militant in the streets as we are in our tweets.